On Wednesday February 22, Gluten-Free Ontario had its first ever event. 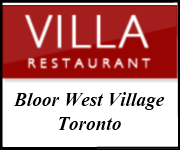 The event took place at VILLA Restaurant on Bloor West Village (between Runnymede and Jane) and the total attendance was 20 people.  Not bad, for a first event. I had met some people in person before, others I had been in contact with online and there were some who I had never talked to before.

When I arrived, there was a pretty Prix Fixe menu with my logo on it!  I had chosen the menu a few days prior but I had no idea the menu would be tailored so perfectly for the event... take a look!

We had the choice between soup and salad to start and then an entree of either pasta or pizza.

Special thanks to my friend Lat from The Experimental Cupcake for taking the above pictures!!

The last of the four entree choices was Margherita Pizza but I don't recall seeing anyone with that one.  I ordered the Primavera since I had never tried it before but the Margherita Pizza was second choice in my mind.

Conversation just seemed to flow between tables, discussing Celiac-related topics and beyond.  I tried my best to spread my time between tables, making sure I got a chance to meet everyone.

I would be lying if I said the planning of this event was a piece of cake.  There were hiccups along the way.  First, I had a guest list of 38 people, which suddenly dwindled to 30 just a couple days before the dinner and then only 23 people arrived.... and 20 people stayed for dinner.  I wish everyone who had RSVP'd had made it to the dinner but I know sometimes things pop up last minute.

Feedback from the event has been extremely positive!  Everyone seems to be asking for monthly events (what are they trying to do... make me crazy?!)  Give me a few weeks and I'll see what I can do.

I would also like to send a special thank you to PatsyPie for sending yummy cookies, biscotti and pie crusts to me to hand out as door prizes at the end of the dinner.  I can't wait to see what kinds of pies you guys come up with!!

I know I mentioned this before but I will say it again...

If you would like to plan an event in your city, please set up a Facebook event with all of the details (you will be responsible for confirming details and reservations with the restaurant)
and I will be happy to repost the event to help spread the word.
Labels: about jax, events, GFO updates, pasta, pizza, restaurant, soup, vegetarian Posted by Unknown on Friday, February 24, 2012