Oh, the sacrifices I make for my "job."  The other night I conducted a very (un)scientific study of beer.  Gluten-free beer. 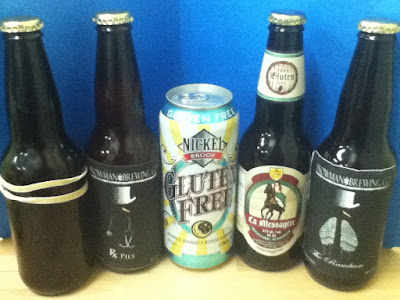 All these beers in one evening... to settle a debate.


Is there such a thing as gluten-free beer that tastes good?  And further, would it taste like beer to a non-Celiac beer drinker?


It's one thing to impress a Celiac, who may not have tasted "real" beer in a few years and dreams of once again having a cold brew... but to impress someone who (regularly) drinks regular beer is the real test.

I was diagnosed with Celiac Disease at age 19 so I never really got to experience real beer.  (Me, underage drinking?!  No, never!...)


Last week, I interviewed Snowman Brewing and also got Fearless Fred of 102.1 the Edge to review one of their gluten-free beers on the radio - you can listen to the full review on his blog.


It was only natural to followup with a review post of my own.  I was fortunate to receive three different beers from Snowman Brewing.  I also went to the LCBO and picked up La Messagere Blonde and Nickelbrook Gluten Free to do a side by side comparison to Snowman Brewing.


It is important to note that I enlisted the help of my friend Shawn (who does not have Celiac Disease) to help me review each beer.  He is a self-proclaimed "beer enthusiast" and he came up with this crazy idea to do a blind taste test, comparing the gluten-free options to "regular" beer with similar qualities.


For the record:  I did not taste test between the two!!


I poured and tasted each gluten-free beer and then had him taste the two and pick which one he thought was the gluten-free beer.  The results of this initial experiment were quite interesting!  So interesting in fact, Shawn felt the need to call his friend Fil, a graduate of the Culinary Institute of America, to get a professional review of the beer.  He is the Food & Beverage Manager at Markland Wood Golf Club.


The ratings out of ten were given based on their personal beer preference.  Remember that everyone has their own "favourites" but the results of this taste test are very encouraging for future beers to come to the market.


So if you've ever wondered which gluten-free beer passes the non-Celiac test, read on!! 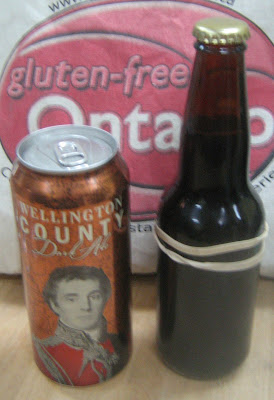 The Snowman Brewing Brown Ale is a 4.5% beer with a rich dark colour, and has a roasted grain flavour with hints of chocolate, with a crisp finish.  We paired this up with Wellington County's Dark Ale.  There was a noticeable difference in clarity when pouring the beers and the gluten-free beer did not form much foam on top. 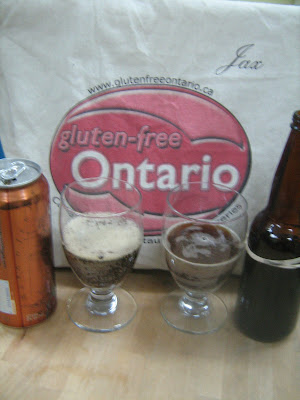 
Shawn: Tasted both and confidently decided Snowman Brewing was the "real" beer.  HA - wrong!  He continued drinking and decided he preferred the gluten-free Snowman Brewing - it was more flavourful! After me telling him the one he liked was actually gluten-free, he said, "That is crazy good!" 8/10


Fil: Described the Snowman Brewing beer as nutty, having a coffee or chocolate flavour and a longer finish while the Wellington beer had a crisper overtone. He correctly identified the "real" beer but said, if he had celiac he would think, "Finally I can drink beer again." 7/10 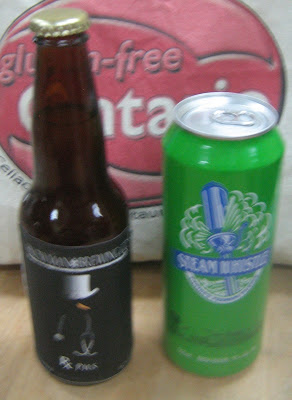 The Rx Prescrption Pils is a 6.2% Bohemian Pilsner that has a floral, hoppy scent, a bitter, clean taste, and a zesty finish.  The contender, Steam Whistle is also a Pilsner. 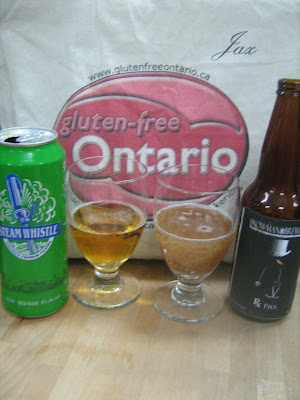 
Shawn: I had him close his eyes to taste test because there was a noticeable difference in colour and cloudiness.  He knew Steam Whistle was the "real" beer because he's familiar with the taste of this particular brand.  BUT he thoroughly enjoyed the Snowman Brewing Rx Pils beer also. 8/10


Fil: With Fil, we compared the gluten-free beer to Bavaria.  He described the Snowman Brewing beer as a very hoppy beer, bitter, refreshing and having a long finish.  He picked the Bavaria as the "real" beer but said, "A beer person would prefer the Snowman Brewing Beer because it has more character."  He also said, "The aroma alone of the Rx Pils would sell it." 7.5/10 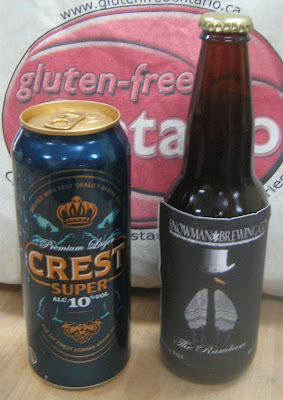 The Snowman Brewing Rambam, a 10% Belgian Quadrupel, is brewed with select malts in the traditional style, and has a sweet, fruity aroma, and a rich, sweet taste with a spicy finish.  Crest is also a 10% beer but they were much different colours when poured. 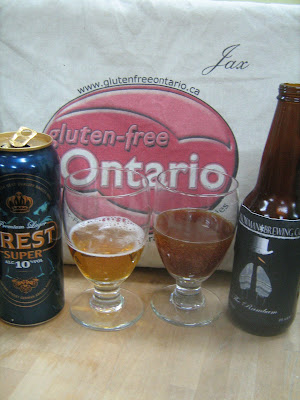 I had tasted the Rambam the previous night and told Shawn I enjoyed it, which affected his decision in choosing the "real" beer.


Shawn:  While he was taste testing between the two, he picked the Crest beer as the one he thought I would have liked.  He said the Snowman Brewing Rambam was a very rich, sweet beer that would be nice to have with cheese as dessert.  Not the kind of beer you'd drink all night long but very enjoyable as a treat.  He was surprised they were able to get such a rich flavour into a gluten-free beer. 8/10


Fil:  Snowman Brewing Rambam had more aroma than the Crest beer - very vibrant.  "Big" flavour, fruity almost like pineapple.  Starts sweet with a bitter finish.  He could only have one at a time because it was so rich. 7/10 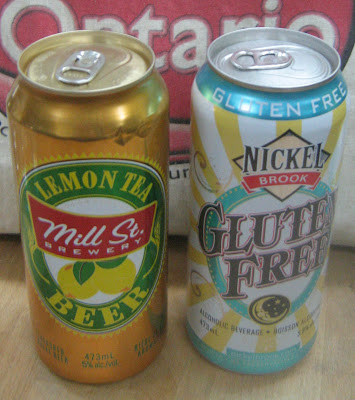 Nickel Brook "alcoholic beverage" (they're not allowed to call it beer since it doesn't have wheat or barley) is available at LCBO.  We compared it to Mill St. Brewery's Lemon Tea Beer. 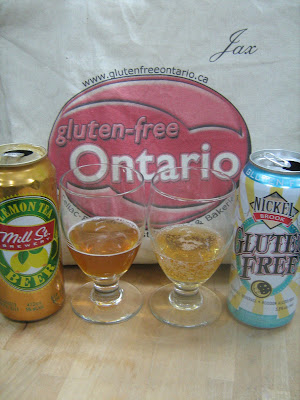 
Shawn: The fact that he knew Nickel Brook was up against a "lemon tea" beer threw off this taste test.  He could smell the lemon and was able to identify the right "real" beer by the smell.  When he had tasted this product before this review, he said if he was diagnosed with Celiac, he would choose to drink wine instead of Nickel Brook.  He still feels the same way. 4/10


Fil: He did not have time to compare the Nickel Brook product to another one. When he smelled the Nickel Brook Gluten Free, he said it doesn't smell right.  After taking a cautious sip, he said, "Nah, this is gross," and pushed the glass away. 1/10 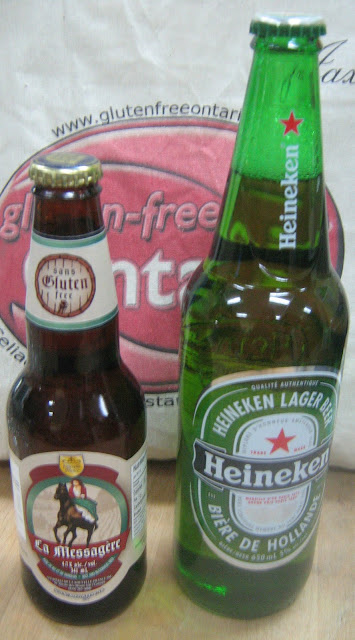 La Messagere is available at LCBO. 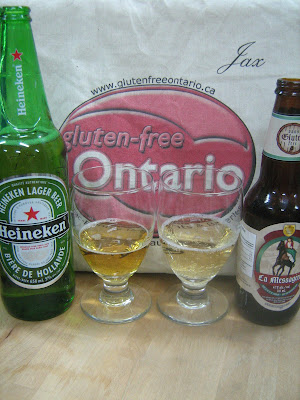 
Shawn: Just by smell, he knew the gluten-free beer was not real beer. He said it didn't taste bad, just doesn't taste like anything and that it tastes more like an apple cider than a beer. 4/10


Fil: Again, Fil did not have time to compare the two beers.  Upon smelling La Messagere, he said, "Nothing going on... like smelling water."  After tasting the product, he added "tastes like water, too."  He had enough of that and did not finish the glass. 1/10


Shawn: The gluten in a beer isn't the deciding factor in the taste of beer. You can definitely produce a great-tasting gluten-free beer because other grains can be malted.


Fil:  Snowman Brewing has it made, based on the gluten-free options already on the market.


I hope you enjoyed this experiment.  There's hope for the future.


What is your favourite gluten-free beer?


How excited are you for Snowman Brewing to get their butts moving and get these products in stores?!
Labels: gluten-free beer, product information, Product review, products, toronto Posted by Unknown on Thursday, November 10, 2011