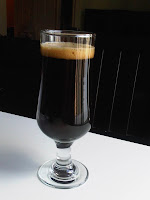 I cannot contain the excitement!!

Fearless Fred, who is a radio host on the Toronto radio station 102.1 The Edge, does a beer review every Friday afternoon between 2 and 7.  I had "tweeted" him a couple times on Twitter asking him to do a GLUTEN-FREE beer review on the show, thinking nothing would come of it... well, guess what?!

This Friday, November 4, 2011,
Fearless Fred will be reviewing gluten-free beer on the radio!!

Here's how it all started...  you can laugh at me all you want but I'm stubborn and I've learned that perseverance is key ;) 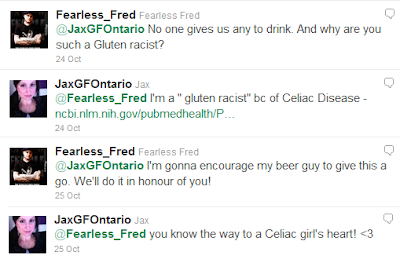 Alright, so I may have developed a little bit of a crush on Fearless Fred... but nobody's supposed to know.  So shhh.

Fearless Fred's "beer guy" is Chris Schryer.  He's the guy behind the Toronto Beer Blog.  He has tons of beer reviews and in late October (before I even knew Fearless Fred would actually be reviewing a gluten-free beer) I noticed a few recent ones about a company called Snowman Brewing and they make nothing but gluten-free beer.

But how could this be?  I thought I was familiar with all of the gluten-free beer available in Ontario..?

I immediately searched Snowman Brewing on Facebook and found this information on their page:
_____
Snowman Brewing is the garage-brewing team consisting of Kevin Snow and Hirsch Goodman. We are the only Ontario brewers who brew exclusivley Gluten Free.

I requested more information about the products.  To my surprise, I got a response within ten minutes from Kevin Snow.  He puts the "Snow" in Snowman Brewing.

Originally, I was skeptical since this is a home-brew operation.  I conducted an interview with Kevin Snow both to satisfy my own curiosity and for those of you who are interested in getting more information about the company.

Jax: How and when did the company start? Do you or someone you know have Celiac Disease or gluten intolerance?

Snow: Hirsch and myself have been brewing beer for around 3 years or so, but about a year and a half ago, we started experimenting with gluten free.

Hirsch’s mom is a celiac, and always complained that she couldn’t try our creations. So, we decided to challenge ourselves and see if we could do better than what was out there. Ever since then, I’ve discovered that there are so many people out there who crave our product. It seems everybody has a friend or family member either suffering from some type of gluten intolerance or has decided to go on a gluten free diet, and gives up on beer because they would rather drink nothing than what was available (thus, why we continue to do what we do!)

Jax: Which grains do you use?

Snow: Our beer is made with a blend of different ingredients. We use Millet, Buckwheat, and Amaranth currently, but are always experimenting with other grains. The biggest difference between what we do and other gluten free beers is that we actually malt the grain ourselves, to bring out the characteristics you would normally get in beer. Other beers generally use syrups, usually sorghum based, and just add hops and yeast, making it beer-esq.

Jax: How long does it take to brew a batch of gluten-free beer?

Snow: To make a batch of beer, it takes longer than regular beer due to the malting process that we use and the fact that we culture our own yeast. With traditional beer, you can simply purchase your grains pre-malted, and brew right away. We require about a weeks prep time to get the malt ready, and several days to produce the yeast starter. However, once brew day comes, it’s really not that different from regular beer, and it usually takes us around 8 hours from start to finish (including set up and clean up). After it has been produced, it takes about 5 weeks to ferment an Ale, and longer for a lager.

Jax: What is the percentage of alcohol?

Snow: The alcohol content of our beers varies, depending on the style.

Our Brown is 5% I believe, while the Belgian weighs in at a whopping 10% (definitely not your light beer). Making great tasting gluten free beer is possible, it just takes more work than your traditional stuff.

Jax: How can people get your products? Will they be available in The Beer Store or LCBO in the future?

Snow: How people can get our product is by asking us. We don’t sell it yet (as its still homebrew), so we just give away samples to get feedback from people, giving us the opportunity to refine our recipes. Right now in our fermenter (AKA the chest freezer in my garage) we have a Czech Pilsner, a Belgian Quad, and a Brown Ale, and more is planned for the future. As for selling the product, we’re still in the planning stages, but we’ll definitely let the world know when we go ahead with it.


Snowman Brewing has even tested their beer with EZ Gluten test strips to prove there is no gluten in the final product.


There shouldn't be since all of the ingredients are completely gluten-free but this makes it official.


As someone commented on this photo on their Facebook page, "it's like a pregnancy test for beer" - funny and true!


I am decidedly Snowman Brewing's biggest fan - Kevin said so himself.  But I have yet to try the beer.  I get my first taste test this Saturday - I can't wait!!  Don't worry... I will keep you guys posted with my review of Snowman Brewing shortly!

I would like to personally thank Snowman Brewing for seeking to fill the need for a REAL gluten-free beer.  And special thanks to Kevin Snow for allowing me to interview him for this blog.

And another thank you to Fearless Fred and Chris Schryer for agreeing to review gluten-free beer on the radio!  Thank you!!

I will also post the link to Fearless Fred's blog post with the beer review here on the Gluten-Free Ontario blog once the audio is available.
Labels: gluten-free beer, interview, product information Posted by Unknown on Wednesday, November 02, 2011